As we mentioned the previous term, from the Entrance Hall there are two doors that lead below grounds, one toward the kitchen and Hufflepuff's Common Room, while the other to the dungeons where the Potions Classroom and Slytherin's Common Rooms are located.

Dungeons
The Dungeons are entirely made out of stone and there are many passages and rooms, all of which are rather cold and dark as the only source of light/heat are the torches placed along the walls. Most of the rooms are easily accessible as they're not locked, but some of them are, and some are even magically sealed or hidden.

Potions Classroom.
Potions Classroom
The class is held in one of the dungeon rooms, though a very large square-sized one so it is big enough to hold about twenty students along with working tables, their cauldrons, measuring scales, and other required appliances. There is one huge supply cupboard where students get the ingredients for their potions, and a blackboard where the teacher can write instructions and notes about the potions.

The walls are almost completely covered with shelves filled with glass jars containing various ingredients including picked animals. In the corner of the classroom there is a stone basin where cold water pours out of a gargoyle's mouth, and students use it for washing their hands, phials, ladles, and the rest of their equipment. Of course clean equipment is very important for this class because residue from previous brewing can cause side effects on new potions. 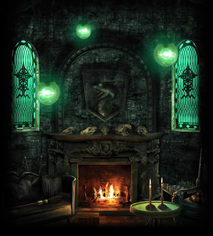 Slytherin's Common Room.
Head of Slytherin's Office
The office is pretty much the same as the Potions classroom, as it has all the shelves and cupboards with ingredients and it looks similar. However, it is significantly smaller and there are no tables and cauldrons for the students. On top of that, this is a much warmer room because it has a big fireplace which gives the room a gloomy look, though it lacks torches so it is still dimly-lit.

The room is quite long, dungeon-like, with a low ceiling and walls made out of rough stone. It has a dark aura with eerie green-ish light coming from the green lamps hanging from the ceiling. It also doesn't help that the room is located under the Black Lake so all windows are actually looking at the depths of the lake itself. Students can observe some of the inhabitants of the lake, such as the Giant Squid, passing by the windows from time to time.

The interior is most consisted of low backed black and dark green leather sofas with buttons, high backed chairs, dark wood cupboards, and skulls and other creepy figures on the walls. There is also one elaborately carved mantelpiece below which a fire burns, and this is the only warm element in the room. One can only imagine how cold this area must be during the winter period. The dormitories themselves aren't much different - with the exception of silver lanterns instead of green ones, and the various tapestries depicting famous Slytherin members. They also have four-posters with green and silk hangings and beadspreads embroidered with silver thread.

The Kitchens.
Kitchens
The Hogwarts Kitchens are located directly under the Great Hall and they are basically a copy of the Great Hall itself. This is not by coincidence, it's done for a very important purpose. The house-elves that work there simply place the food on the tables in the kitchens, and then the food is magically transported to the corresponding tables in the Great Hall above.

The kitchens have a huge brick fireplace on one of the walls and many brass pots and pans are lined along the walls, which are obviously used for the preparation of the school's food. The kitchens are staffed by around hundred house-elves, which were hired by Helga Hufflepuff who wanted to offer them a place in Hogwarts to make sure that they're not abused. She fought fiercly for their rights in her time.

You enter the kitchens by tickling the pear on the portrait of a bowl of fruits, which then squirms and giggles and turns into a green doorknob. One would advise against entering during meal hours because as you can imagine, the place is rather busy and hectic at that time. 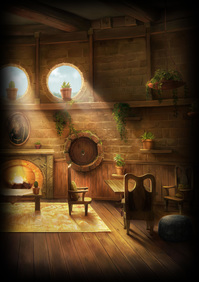 Hufflepuff's Common Room.
Hufflepuff Common Room
The Common Room is accessed through a still life painting nearby the kitchens. There is a stack of barrels, one of which leads to the common room. One has to tap the correct barrel in the rhythm of 'Helga Hufflepuff' in order for the lid to open and reveal the passageway. If you tap the wrong barrel, you'll be drenched in vinegar.

The Hufflepuff Common Room is known as the coziest common room in the castle and it is quite sheltered so there is absolutely no noise reaching this room. Sleeping at night is much easier here than anywhere else in the castle. It's a round room with circular windows showing rippling grass and dandelions.

The round room always feels sunny, and the circular windows look immediately at the base of the castle's grounds, often showing rippling grass and dandelions. Hanging from the ceiling or sitting on windowsills are numerous exotic plants, often brought by the Herbology Professor or the Hufflepuff Head of House. There are many overstuffed armchairs and sofas, all upholstered in yellow and black; and many copper, yellow, and black hangings on the walls.

Following small underground tunnels, you can reach the dormitories which have perfectly round doors, completely resembling barrel tops. The four-poster beds are covered by patchwork quilts, there are copper bed warmer hanging on the wall, as well as many copper lamps which give the whole place an even warmer atmosphere.