We finally get to enter inside the castle itself, obviously through the huge and heavy double oak front doors. Once you set foot inside, you will find yourself in the Entrance Hall, also known as the Front Hall, with suits of armor on each side of you. The closest door leads to the Chamber of Reception, while on the opposite side of the entrance hall there is a wide marble staircase which leads to the First Floor. There are two small doors on each side of the staircase - the left one is followed by a stairway down to the Dungeons, and the one on the right is followed by a stairway that leads down to the kitchens and Hufflepuff's Common Room.

On the right side of the entrance there is a small door for the broom cupboard, and huge double doors which lead to the Great Hall. Opposite of this, on the left side of the entrance, there is a tiny waiting room for first years and a small door leading to a corridor with several chambers. These include, but are not limited to, several classrooms (most notable - Classroom #11), a Staffroom, the Caretaker's Office, and possibly a room with Herbology stock. A side door from this corridor opens up into the Middle Courtyard (or the Transfiguration Courtyard) which is the place where students gather during their breaks, and is also part of the Transfiguration Department. Other notable elements include the Quad and the Viaduct.

Chamber of Reception
Also known as the Welcome room. This room is where the first years are welcomed to the school by one of the Professors and are told to wait there for the Sorting Ceremony and the Welcoming Feast to being. Then they're called to enter inside the Great Hall and one by one they get sorted into one of the four houses. Meanwhile, their pets and trunks stay in this room until the Welcoming Feast is over, after which they can collect them and proceed to accommodating themselves in their house's Common Room.

Entrance Hall.
Entrance Hall
The Entrance Hall is a large expansive room whose ceiling is so high that you can hardly see it, and its floor is built out of flagstone. There are many torches lit along the walls, as they're the only source of light in this room. It is the first and main hall in the castle, and it connects all the various parts of the castle.

In a corner opposite of the entrance doors, there are four giant hourglasses filled with gemstones. Each hourglass represents the current house points for a different house, and therefore they all contain different types of gemstones - Gryffindor has rubies, Slytherin has emeralds, Ravenclaw has sapphires, and Hufflepuff has diamonds. Supposedly above the Entrance Hall there is a balcony with a great look over the castle's grounds. During the times when the Triwizard Tournament is held, the Goblet of Fire is placed in this room as well.

Broom Cupboard
Barely big enough for several people to enter, this cupboard serves as a storeroom for various cleansers, quidditch broomsticks, and other unwanted objects. Since it's rarely used, this is a very good hiding place in the castle. 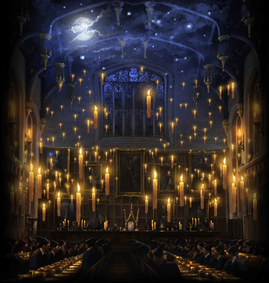 The Great Hall.
Great Hall
The Great Hall is one of the castle's largest rooms, with tall walls reaching up to the ceiling that happens to be enchanted to appear the same as the sky outside. There are windows in this room, but it is also enlightened by hovering (flying) candles. The interior is rather simple - four long tables placed horizontally in a row, and then another one placed on a raised platform vertically at the other end of the room. Starting from the door, the first table is for the students from the Slytherin house, the second for the Ravenclaws, the third for the Hufflepuffs, the last one for the Gryffindors, and the High Table is for all the staff members. In the center of the High Table there is a throne-like chair where the current Headmaster (or Headmistress) sits, and the rest of the staff sit on the left and the right of him/her. Behind the High Table there is a small door that leads to an antechamber with a fireplace and many portraits of wizards and witches from the past. Supposedly, there is a door that leads from here straight to the castle's grounds (so the staff members don't have to enter through the Entrance Hall).

The Great Hall is the main gathering place in the castle, used for everything from eating daily meals and receiving owl post, to hosting special events. Notable events include the Sorting Ceremony, the Welcoming Feast, the Duelling Club, the Halloween Feast, the Yule Ball, the Christmas Feast, Apparition Lessons, OWL (Ordinary Wizarding Level) Examinations, NEWTs (Nastily Exhausting Wizarding Tests), End-of-Year Ceremony, etc. The interior has been known to be modified for the purposes of different gatherings. 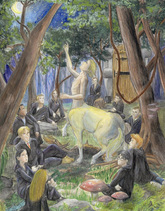 Classroom #11 (art by philotic-net).
Classrooms (Classroom #11)
As we already said, there are several classrooms on the ground floor, although they're rarely used. One that we know about is the so-called Classroom Eleven. At one point in the past it was used as a classroom for Divination when the teacher wasn't able to climb to the actual classroom located at the top of the North Tower. The room was enchanted to imitate the Forbidden Forest so it was full with trees whose branches covered the ceiling and the windows, while the ground was mossy. Due to the branches and leaves over the windows, the room had a green light.

Staffroom
A long panelled room located on the left side of the long corridor, with two stone Gargoyle statues capable of human speech on each side of the entrance door. Although it is believed that these Gargoyles may 'command' the door not to open (if they realize it is not a staff member that wishes to enter), it has never been confirmed. But we know for sure that they will give away your trespassing to the staff, so I would advise against trying to pull any pranks here. It is said the room is filled with mismatched, dark wooden chairs, a few desks, a wardrobe, and a fireplace. 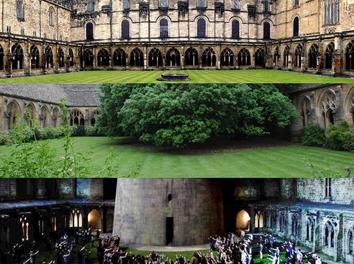 Different views of the Middle Courtyard.
The Caretaker's Office
This is a rather small and simple room, although still big enough for the Caretaker to live there. It is enlightened by a single oil lamp that hangs from the ceiling, though the smell that dominates reminds vaguely of fried fish rather than oil. The interior is composed of a single bed, a working desk, a very old stove, and several filling cabinets. Most of them contain folders with details about the misdeeds of students through the history, while the rest of the cabinets are filled with confiscated items and the Caretaker's personal possessions.

Herbology Storeroom
Although we don't know the specific location of this room, we can assume it is found somewhere along that same corridor. But it is also connected to the Herbology Greenhouses. It works as a storeroom for Herbology equipment and ingredients, being full with drawers and shelves with a lot of jars, pots, boxes, shovels and shears, among other things.

Middle Courtyard
This is one of the closed 'rings' in the inside part of the castle, and is probably the largest courtyard. The open area is covered with green grass, a single large tree that has grown over the years, and the center is occupied with an enormous iron Armillary Sphere. This is also known as the Transfiguration Courtyard because the Transfiguration Department is located next to it, and the courtyard is often used for practicing various transfiguration charms. The Department consists of the main class office where the teacher resides, a storeroom used for various equipment, and a few classrooms (including Classroom 1B). Classroom 1B is the official 'Transfiguration Classroom', where the classes are held. It is a large room with high windows, a few rows with several desks each, several bookshelves, several cages, two chalkboards, and a bigger desk at the front of the class for the teacher.

The Quad.
The Quad
The Quad is also known as the Paved Courtyard and it is a courtyard that falls in the exterior part of the castle, but it's obviously still connected to it. As the name itself points out, this courtyard is paved and it is used for extracurricular activities, such as playing Gobstones. It is directly connected with the Viaduct and the Boathouse (we'll discuss this in the later lessons), and there is a tower on each of its corners --- the Gryffindor Tower, the North Tower, the Stone Bridge Tower, and the Grand Staircase Tower. In addition, the middle area hosts the Hospital Tower and the Suspension Bridge Towers. The Quad has a talking stone Gargoyle statue like the ones in front of the Staffroom.

The Viaduct.
The Viaduct
A stone bridge connecting the castle's grounds with the Quad, which means this is an alternate way to enter the castle. The Viaduct is illuminated with iron torches, and the walkway itself has a stone balustrade on each side to prevent it from falling down.

We've learned enough to let us proceed up the castle, to the next floors. Onwards!