Care of Magical Creatures with Professor Rubeus Hagrid.
Having taken a detailed look of the whole castle, it's only right that we take a look at the staff positions that exist in the Castle itself. As impressive as the Hogwarts Castle is, it would not exist if it wasn't not only for the founders but also for the people who kept the school running for so many tears.

We'll do this by explaining the positions and listing known people who have filled those positions throughout history, along with the timeline in which they held it, if it is known.

Professors
Ancient Runes
The class is mostly based on reading ancient runes for various purposes in the Wizarding world. An advancement through later years in the Hogwarts studies is that students also learn how to translate from Ancient Runes to English, and vice versa.
Arithmancy
The work for this class includes writing essays and creating complex number charts. Basically, it is a mix of numerology and Divination through numbers. Of course that's putting it in very simple terms and does not show the whole scope of the studies.
Astronomy
This class requires from students to observe the stars and planets, fill in star charts, write essays with actual facts proving statements that come from the placements of said celestial bodies. You could say it's analyzing the movement of celestial objects and their environments.
Care of Magical Creatures
Students in this class are required to study various creatures, to feed them, to breed them, to take care of them, etc.

Defense Against the Dark Arts with Professor Bartemius Crouch, Jr.
Charms
The name is a rather clear give away, in this class students learn and practice various charms. One could argue this is one of their most important courses if they wish to be practicing wizards/witches.
Defense Against the Dark Arts
The concept of the class various depending on the Professor but the general point of the class is to study dark creatures and magic, and subsequently how one can deal with them if they ever happen to be in an unfortunate position where they face them.
It is said this position is "cursed" and that is considered the reason why the professors change so frequently.

Divination
In this class students mainly learn about reading the future with the use of various methods such as tea leaves, crystal balls, palmistry, etc.It is believed the class was split between the above listed two teachers from 1997 onward. So there would be two versions of it, offered by two different professors.

History of Magic with Professor Cuthbert Binns.
Herbology
Students learn about various plants from their appearance to their properties and of course how to handle them. Students are also asked to take care of the herbs planted in the Greenhouses on the Hogwarts Grounds.
History of Magic
This class is theory-only and it teaches the students about various points of the history of the Wizarding World.
Muggle Studies
The class is completely centered around muggles and their way of life. Students learn about life without using magic at all, they learn about all muggle appliances and tools, muggle jobs, and more. This is an important course that can help someone understand muggles and be able to blend in among them perfectly. To be honest, fully understanding muggles may not be possible, as quite often they do not understand themselves, but it is still interesting to learn about muggles.

Potions with Professor Severus Snape.
Potions
In Potions class students learn about the properties of all ingredients, the recipes and properties of various potions. They are given assignments to try and brew actual potions in the classroom. They can also have other assignments such as writing essays that analyze the use of different potions.
Transfiguration
This class teaches students about the art of changing the form and appearance of an object. It includes everything from simple laws to actual practice. 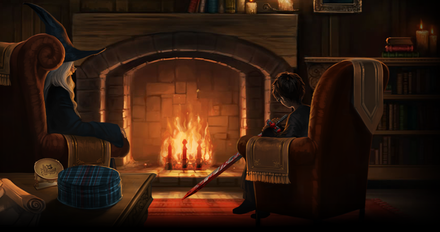 Professor Albus Dumbledore in the Headmaster's Office with a student.
Other Staff
Head of School (Headmaster/Headmistress)
This is the highest staff position in Hogwarts, the current Headmaster/Headmistress makes all the major decisions when it comes to the safety of the school but also all decisions for the day-to-day functioning of the school. They have the authority to override all decisions made by other Hogwarts staff, with the exception of the decisions made by the Board of Governors (a group of 12 wizard and/or witches who oversee the school and appoint the Head of School).

Over the years there have been many people leading the school, though the time frame for some of them is unknown and some of the people are unknown to us. That is only to be expected, considering how long the school has been running. Therefore we'll have just an overview of those who we know - first the ones whose period is unknown, and then the ones we know for sure (regardless if they had the position permanently or temporarily).

Albus Dumbledore announcing the Hogwarts Champions for the Triwizard Tournament. 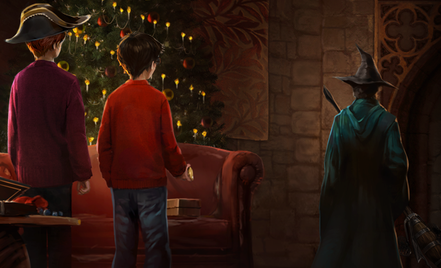 Professor Minerva McGonagall confiscating a student's broomstick.
Deputy Head of School (Deputy Headmaster/Deputy Headmistress)
The Deputy is a Professor at Hogwarts who acts both as an assistant and a back-up to the Head of School. They are involved with the same duties, with the exception that the final say does not belong to them even though their input can of course influence that. Whenever the current Headmaster/Headmistress is not available, the Deputy takes over the responsibilities until they return or otherwise till the Board of Governors appoints a new permanent Head of School.
Head of House
The Head of House is a title given to Professors who are selected to oversee their respective houses. They're responsible for managing their house as a whole, including selecting house staff among students. In order for someone to be selected as a Head of House they must have been a member of that house during their studies at Hogwarts. A Head of House can also hold the Deputy Headmaster/Headmistress position at the same time, but not the Headmaster/Headmistress position (they would have to give up their Head of House duties if they're chosen as one).

Professor Horace Slughorn hosting a party.
Caretaker
The Caretaker is in charge of the Castle's hygiene and cleanliness. He or she also patrols the Castle corridors to ensure no students are wandering late at night, and he/she issues punishments if they catch any students.
Matron
The Matron is the Hogwarts nurse that leads the Hospital Wing and oversees all injured students and staff (unless it's a very severe case at which point she sends them to St. Mungo's Hospital for Magical Maladies and Injuries) while also leading the rest of the nurses.
Groundskeeper
This wizard or witch basically tends and looks after the castle's grounds, but they also act as security for the castle itself.
Librarian
Monitors the castle's library and maintains the order there. They're also in charge of watching over and keeping the books safe. If anyone damages the books or tries to steal them, he or she has the power to punish them.

In addition to all the positions we have covered here, there have been some temporary ones such as High Inquisitor. However, those have not been crucial for the school and as such we won't be covering them.