As we already said in the first lesson, the Hogwarts Castle has seven floors, not counting the ground one. As we already covered the ground one, this time we'll focus on the rest of the floors, studying them one by one. However, I would like it to be known that the rooms discussed here are -NOT- the only ones there, but just the ones we have more information about. There are of course many more classrooms, offices, storage rooms, and corridors that will not be mentioned, simply because we don't know enough about them which proves they weren't really significant anyway.

First Floor
Defense Against the Dark Arts Classroom
Probably one of your favorite classes resides in this room, located in the last corridor on the left side of the marble staircase. It really looks like a regular classroom, filled with chairs and tables for pairs of students, while at the front there is a larger desk for the teacher. Although it is believed that this teaching position is cursed and the teacher changes very often (presumably every year), the room doesn't undergo many changes, with the exception of the portraits that are there (the teacher usually puts up the ones he likes). Behind the teacher's desk there are spiral stairs that lead up to another door, which is actually the DADA Professor's Office located on the second floor of the castle. The classroom itself has many windows, all of which look outside at the castle grounds. Although the prime light source in this room are still the old iron chandeliers hanging from the ceiling.
However, it is supposed that this class was later taught in a classroom on the Third Floor, which was previously unavailable due to the corridor being out of bounds. 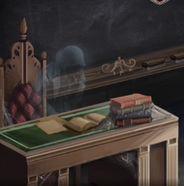 History of Magic Classroom.
Muggle Studies Classroom
Yet another classroom that has pretty much the same interior, though it serves the purpose for another class. It is located in the same corridor, though on the opposite side of the DADA Classroom. Among the other things, this classroom has several muggle objects inside that the students are supposed to study/analyze.

History of Magic Classroom
This is unfortunately one of the more 'boring' classes to the majority of the students. It also has the same interior as the classrooms above, though it is filled with many more books than both of them. The most interesting part about this room is probably the teacher who was born and started teaching in the 17th century, though is still teaching nowadays as after he passed away he became a ghost and he was allowed to maintain his position as a Professor. Students find it amusing when he shows up gliding through the blackboard, instead of coming in through the actual door.

Gryffindor Head's Office
It's the smallest chamber in the corridor where the above classes are, and it is located at the very end on the right side of it. It doesn't have fantastic elements but it includes everything one needs in order to live and work there. Gryffindor students are required to visit here at the start of their 5th year so that they can discuss their career options with their Head of House.

Hospital Wing.
Hospital Wing
The Hospital Wing occupies most of the right side of the first floor. It includes one huge room with many hospital beds (white sheets without holes *coughs*), divided with privacy screens. This is where all the school patients (whether they're students or staff) are admitted and taken care of, as the hospital is actually nicely equipped and is capable to deal with almost all types of injuries. Only in the severest and most dangerous cases people are transferred to St. Mungo's Hospital for Magical Maladies and Injuries.
Adjacent to this room there is a another large, office-type room where the school's matron resides. It has a bookcase, two closets, a working desk, and three beds for patients that need special care.

There are of course some other rooms on this floor, mostly classrooms, though they're not of great importance and we don't have a lot of information about them so we're going to overlook them.

Moaning Myrtle's Bathroom.
Second Floor
DADA Professor's Office
This office has two entrances, one from the second floor, and one backdoor from the DADA classroom on the first floor. It's mostly books and wardrobes or chests with creatures that make the interior, though there are changes made by each new DADA Professors so portraits come and go, as well as other decorative elements. The windows face the Black Lake.

Moaning Myrtle's Bathroom
The girls' lavatory on this floor has been 'out of order' for a very long time. Not because it's out of function, but because of the fact that the ghost of a girl called Myrtle that was killed there spends her ghost days in that lavatory. She's really whiny and cries a lot, and there have been cases when students insult her and she basically floods the bathroom. Though beside this, the bathroom is in proper function, with the exception of one tap. However, if someone says "open" in Parseltongue (snake language) there, they will find out that it doesn't work because that specific tap is the entrance to the Chamber of Secrets and it opens only under that condition.

Charms Classroom.
Third Floor
Charms Classroom
The classroom is designed in that way that students sit in three rows of desks, and are facing a larger table with an upholstered chair where the Professor sits. On the left and on the right of this table there are blackboards, both of which are used for teaching and practicing. Behind the blackboards and the table there are shelves with books and other objects the teacher has found needed. The chamber is illuminated by candles on the walls and a pair of windows placed right above the bookshelves.

Trophy Room
This is the room where all trophies, awards, cups, shields, medals, and other rewards are put up in crystal glass displays. More prominently are displayed the House Cups, the Hogwarts Awards for Services to the School, the Triwizard Cups, etc. Additionally, there are lists of previous Head Students, Prefects, and Quidditch Captains.

Forbidden Corridor
The corridor on the right side of the Third Floor was set as out of bounds during the 1991-1992 academic year, because it held the entrance to the room where the Philosopher's Stone was located. There was supposedly a chamber in this corridor where a trap door was guarded as it led to the chambers where the said stone was placed.

Hogwarts Library.
Fourth Floor
Hogwarts Library
The library is divided into a few sections, which together count thousands of bookshelves, with many books on each one of them. The rules are very strict, as one must sign the books before taking them and then make sure they return them on time, otherwise a punishment will follow. The regular closing of the library is around 8 pm, after which no one is allowed to enter unless they're on the staff. Food and drinks are strictly forbidden and if you're caught with some inside, you'll be in trouble. On top of this, the books are all protected with various spells and jinxes against thievery and damage, so you're not advised to try and sneak out a book or tear down pages of it.

A special section of the library is the so-called 'Restricted Section', located at the back of the library, closed off with a rope. No students are allowed anywhere near it, as most of the books are usually about the Dark Arts or other topics that students shouldn't dwell onto. One can only get a book from this section if they have a signed note from a Professor, which won't be given unless there is a really good reason.

Storage Room
Supposedly near the library there is a narrow corridor that leads to a Storage Room. It is mostly filled with common things as chairs, tables, wardrobes, etc. Though one particular object of interest is the 'Mirror of Erised', which is a magical mirror that shows the deepest and most desperate desires of ones heart. Though as it has been known for people to dwell onto the image in that mirror too much and completely neglect their reality, it is possible that the mirror was later moved so that students can't find it.

Bathroom
Not to be confused with the Prefect's bathroom, the bathroom on this floor is a regular one that any student may use.

Prefect's Bathroom.
Fifth Floor
Prefect's Bathroom
One side of the bathroom is taken by the stalls with toilets inside them, while the other one has a very large tub (which looks more like a small swimming pool) with many bath taps around it. The taps all produce water in different colors, bubbles, and foam; and although one may think seeing its size that it fills up slowly, it actually fills up extremely fast due to magical enhancements. However, this bathroom is closed and not everyone can access it as it reserved only for Prefects, Head Students, and Quidditch Captains, which are the only one who have the password to it.
Sixth Floor
Boy's Lavatory
Similar to Moaning Myrtle's bathroom on the second floor, which served the purpose of a Girl's Lavatory, this bathroom is strictly for the male gender. Just an usual bathroom really, nothing special.

Office
There is for certain a large office on this floor, as we have know both a DADA and a Potions Professor to use it, and even host parties in it. Supposedly it had a fireplace, right in front of two comfy and large sofas, and a big round table big enough for at least ten people. It also had its own private balcony, and apparently two doors lead to this room, from which only one is on the sixth floor.
Seventh Floor
Ravenclaw Head's Office
A small room with basically just a working desk, sleeping quarters, a single window, and lots of portraits. This is the residence of the Ravenclaw's Head of House,

Room of Requirement
Surprise! We aren't going to learn about this room now, but in a later lesson. All you need to know for now is that it is located on the seventh floor. Though as I am sure this was a long lesson for you all, you may now proceed to the Homework, although I suggest a small break from all the reading before that.