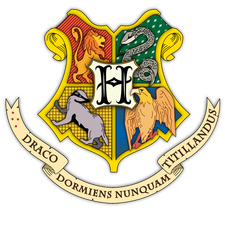 Hogwarts coat of arms.
If you have taken the other History of Hogwarts class, then you already know the Hogwarts Castle was built by its four founders - Godric Gryffindor, Helga Hufflepuff, Rowena Ravenclaw, and Salazar Slytherin. The idea was for it to serve as a school where teenagers can study Witchcraft and Wizardy, and we should feel thankful that it fulfills said duty even nowadays.

The year of establishment is unfortunately unknown. But even though no one can really speak with certainty, it is said it was build a thousand years ago, as the founders themselves lived around 1000 A.D. We don't even know the specifics of its location - we only know that it is located in Scotland, between Edinburgh and Aberdeen, probably closer to Aberdeen and the Highlands. Even its surroundings suggest so as it has a forest, a black loch, and it is sort of surrounded with mountains. Certain wizards and witches believe that it is nearby Dufftown, a small burgh in Banffshire, Scotland. We do know, however, that it is a huge, scary-looking, yet a very interesting building with many high towers, turrets, and obviously has amazing interior.

The castle itself is shielded by many powerful protective charms. The most important one hides the castle from the sight of muggles, as we wouldn't want them to casually stumble upon a group of teenagers doing magic. And since the castle is not presented on any maps, it has become unplottable (even though muggles still see the castle, they see it as an old ruin with a "Danger, Keep Out." sign next to it). Some other charms make it impossible for people to apparate and disapparate in and out of the castle, another blocks the performance of electronic devices inside the castle, etc. There are also many charms cast to protect the castle from attacks and dark forces. Personally I would not put all my trust in those as the castle is right next to a village with many shops, called Hogsmeade, and that place is plottable. Best to always remain vigilant!

The Hogwarts Express as Platform 9 and 3/4.
It is even said that the castle can change its size, its shape, and the arrangement of the rooms inside by will and need. The staff members and the older students will be able to confirm this because by now they've likely witnessed some of those changes taking place. Even though no one actually knows all of the secrets related to the castle as it has an extraordinarily lengthy history and a great amount of ancient magic, it is believed that the castle's ability to change its interior is something that Rowena Ravenclaw contributed with during the building phase.

Students used to arrive at the school in any manner they preferred till the 1936. Starting from that year, arrival at the castle is mostly done via the Hogwarts Express, a steam-fitted train that leaves from platform 9 and 3/4 at King's Cross Station in London. Our students will remember that for the start of the academic year the train leaves at 11 am on the 1st of September. Through the years the train has underwent many changes, like the fact that it runs exclusively on magic from the beginning of the 1990s. Students may still choose to go to Hogwarts via brooms, Floo Powder, or simply apparating to a nearby location, such as Hogsmeade, and heading to the castle grounds from there (if you choose this option you will need to reach the massive oak gates which have statues of winged boars).

Carriages pulled by Thestrals.
Once they have arrived at the castle grounds, students are then transferred to the castle. First years are grouped in fours and chaperoned across the lake using small boats, while older students travel with carriages pulled by Thestrals (winged horses with a skeletal body that is visible only to those who have witnessed someone's death). Inside the castle, all students get a small break to rest, after which they're called to join the staff in the Great Hall, where the sorting of the students takes place.

The sorting is done with Godric's Sorting Hat, which puts each first year student in one of the four houses according to their character. The four houses have the names of the founders - Gryffindor, Hufflepuff, Ravenclaw, and Slytherin, and all of them have Common Rooms in different parts of the castle (as we have mentioned in the other History of Hogwarts course, but you will learn more details in this one).
The Sorting Hat actually has a special song where it sings about Hogwarts. It can change from year to year, depending on the events that affect the school and the wizarding world in general. I think it's a good idea to hear one version of the song now:
"Hogwarts, Hogwarts, Hoggy Warty Hogwarts,
Teach us something please,
Whether we be old and bald,
Or young with scabby knees,
Our heads could do with filling,
With some interesting stuff,
For now they're b are and full of air,
Dead flies and bits of fluff,
So teach us things worth knowing,
Bring back what we've forgot,
Just do your best, we'll do the rest,
And learn until our brains all rot."

The Sorting Hat.
The school's motto, which you can read under the crest in the first image (top right corner of the lesson) is "Draco Dormiens Nunquam Titillandus" and it means "Never Tickle a Sleeping Dragon." This may as well refer to the school's most popular sport, Quidditch, where injuries are a common thing (yet people still show up to watch all the time and cheer for their house's team at all matches). All matches are played in the school's Quidditch Pitch, located at the castle's grounds. Nearby the castle is also the Forbidden Forest, and at the very edge of said forest there is a hut/cabin where the castle's Keeper of the Keys lives. There is also an old and enormous tree on the grounds, The Whomping Willow, which is very dangerous but also very rare and valuable. We already mentioned the nearby Black Lake, where many different species of underwater creatures live, and let us not forget the grounds also host the several greenhouses where the students study Herbology.

Stairways inside Hogwarts.
The Castle has in total seven floors, not counting the ground one. It is crowned with a couple magnificent towers, but also has sub-levels and dungeons. There are also a hundred and forty-two staircases, some of which can change their location, some have vanishing steps that you have to jump, and some are wide while others are narrow and rickety. If you think the staircase magic is wonderful, wait till you hear about the doors - some only open with a correct password, a specific spell, tickling them in the right spot, or asking them politely, and there are quite a few fake doors which are in fact walls.

In addition to that, the castle is full with portraits of various people from the past, and as all things magical they have the ability to move and talk. They can even go from one portrait to another or even visit a portrait outside the castle (for example one in your own house if a "link" between the portraits is set up).

Clearly we can say the castle is alive and things inside seem to change quite a bit. But we can still make a general outline or blueprint and we will cover that in the rest of the lessons. I believe you had enough for one lesson, you may proceed to your first homework now!